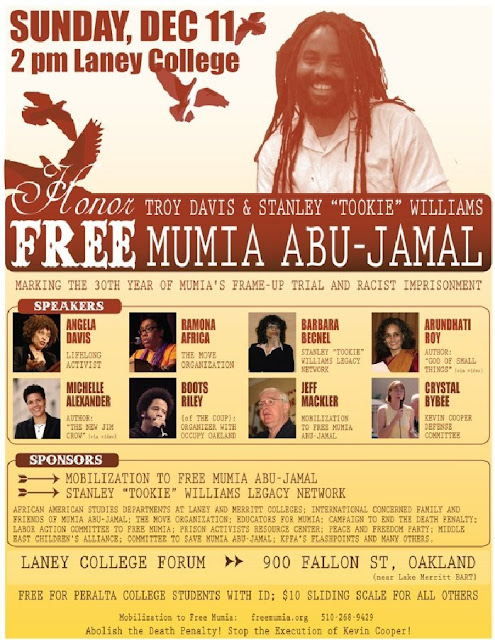 If the video stream down, the audio stream is at http://bit.ly/vuSzMR -- The Event is truly historic!

At the Mumia event in Philly. Cops attempting to intimidate by flying their helicopter around in circles with the lights on the building. Several off duty ones and assorted white supremacist sympathizers rode their motorcycles in front of the building revving their engines. But the huge crowd inside couldn't hear it and didn't notice it cause the youth of the Impact Dance Theater Ensemble was bringing down the roof. Mumia just called in and Amiri Baraka is on now. Goto freemumia.com to watch the live stream right now. 30 years of unjust imprisonment.   Folks stay on the lookout for footage and news from this event. The energy is amazing. Babylon got no juice.

Last night, Maureen Faulkner (widow of policeman Mumia is falsely accused of murdering) called on the governor of Pennsylvania to stop Mumia's call to the event tonight.  This follows her vicious and threatening comments at the Thursday press conference where she came very close to demanding for Mumia to be subjected to the criminality of prisoners in general population.

If we get a new number we will send it out to you.  You can also try to locate some alternative numbers for the governor on the internet if this one does not work.

Protest the threatening nature of Maureen Faulkner's statement on December 7, the fact that her call was tantamount to encouraging other prisoners to hurt Mumia.

Demand of that governor that Mumia's phone call not be blocked, that a vigilante atmosphere is something he must stop as governor and not encourage and feed further by conceding to her demand.

Call on the Attorney General to intervene in this bloodthirsty atmosphere and to guarantee that Mumia not be hurt or denied his rights.

Suzanne Ross, for the Free Mumia Abu-Jamal Coalition
at 9:39 PM No comments: Links to this post

After the event held at the Constitution Center on December 9 there will be a post-event fundraiser.

WE THE PEOPLE PART II

Freedom song to Mumia from Samuel Legitimus in France

Just before the great event of Decembrer 9 (and the good news - after all - of wednesday) :

The song will soon be freely downloadable on this myspace page:

Samuel
at 8:43 PM No comments: Links to this post 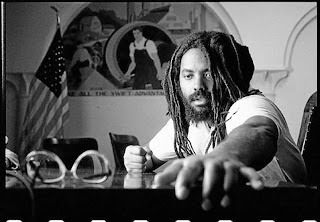 From DREAD TIMES - Dedicated to the free flow of information - http://www.dreadtimes.com

Excerpt: ‎"MAJ: Black love itself, in a profoundly Negrophobic nation such as ours, is a radical thing, for it opposes the mainstream trajectory of U.S. life, policy and culture. We need to deepen and expand that ethos, so that it becomes a social force that has the power to attract, and with it, build. As in the discussion on church, social movements – especially radical and revolutionary movements – changes social reality in other spheres of life. It changes consciousness. Deep, caring, holistic love among our People can therefore make us more whole in all our relationships in our community. That’s because love is inclusive; while hatred is exclusive. There is power in love, which knows no limitations. That, I’m convinced, is our greatest treasure"

Read the full interview at: http://lifeandtimes.com/lock-my-body-cant-trap-my-mind


“This poignant volume gives voice to what is rarely heard: African American men speaking for themselves, without barriers or filters, about the many forces impacting their lives. From their discussions about love to those about the state of emergency of our educational is in, Marc Lamont Hill and Mumia Abu-Jamal offer us an important gift of insight and analysis and we must treasure it.”

“Mumia Abu-Jamal and Marc Lamont Hill have consistently challenged and inspired me. Now, with this book of conversations, the entire world can see their brilliance, courage and deep love for Black people. This book will change your life!”

From DREAD TIMES - Dedicated to the free flow of information - http://www.dreadtimes.com


TalkingDrum on WURD: Barbara Grant, Mumia (call's into the radio station), Pam Africa and Dr. Johanna Fernandez, calls up to WURD to discuss his current outlook on life, the case, and his future pertaining to Mumia. The fight to free Mumia and to get him a new trial is not over. Speaking about the up and coming event on December 9th 2011 at The Constitution Center in Philadelphia broadcast around the world hat will include Michelle Alexander, Amiri Baraka, Cornell West, Johanna Fernandez, Marc Lamont-Hill, Pam Africa, Ramona Africa, Michael Coard and others. Oppose the death penalty in the u.s., and free all political prisoners like Mumia.

http://www.youtube.com/watch?v=LY6DKucb4K0
at 8:31 PM No comments: Links to this post 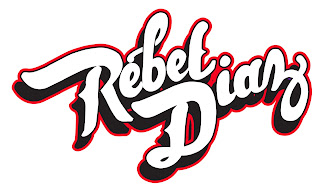 Check out Rebel Diaz' Tribute to Mumia - "Never a Prisoner"at

http://soundcloud.com/agentofchange/free-download-rebel-diaz-never
at 8:28 PM No comments: Links to this post

Analysis/background on Mumia decision by D.A.

Philadelphia District Attorney Seth Williams announced today, Wednesday, December 7, 2011, that he would NOT seek a new sentencing hearing to execute innocent death row inmate Mumia Abu-Jamal. On October 11, 2011 the U.S. Supreme Court, affirming two federal court decisions in the same case, effectively ruled that the sentencing portion of Mumia's 1982 trial was a violation of the U.S. Constitution. This mandated that Williams either conduct a new sentencing hearing OR place Mumia Abu-Jamal in the general prison population to serve a life term without possibility of parole. Williams and Pennsylvania officials chose the latter, thus eliminating the possibility of Mumia's being executed.

Mumia's attorneys and supporters are now focused on the fight for a new trial before a new jury where evidence of Mumia's innocence can for the first time be presented in full public view. Mumia's 1982 racist frame-up trial has been widely condemned, with organizations ranging from Amnesty International, the European Parliament and the NAACP to heads of state in France and South Africa demanding a new trial.

Winning a new trial for anyone convicted of murder is no easy task. Mumia's legal team must meet an extremely high legal standard. This includes presenting "compelling and not been previously litigated new evidence" that could not have been "previously discovered through due diligence." A special investigator and associated team has been hired to begin this difficult and arduous process.

We have reached the end of one struggle and the beginning of another. But, better to fight on for Mumia's freedom in the context of a threat of execution NOT hanging over his head.

In truth, the recent Supreme Court action, essentially affirming previous decisions of the Federal District Court and the U.S. Court of Appeals for the Third Circuit that Mumia's death sentence was unconstitutional, was a political decision as well as an affirmation of the "letter of the law," one that was 30 years in coming and one that never would have come had it not been for a massive national and international effort on Mumia's behalf.

A Philadelphia, if not national decision, was obviously made at the highest levels to avoid a new sentencing hearing where evidence of innocence could have been presented that would have exposed the entire racist and frame-up nature of Mumia's 1982 trial.

Such a hearing, the DA likely judged, might have led to a level of public outrage and exposure of the criminal "justice" system sufficient in itself to force a new trial despite formal legal restrictions to the contrary. The risk to an institution where the racism inherent in U.S. society, expressed in the actions and mentality of corrupt police officers, judges, prosecutors and reactionary laws, makes justice for the poor and oppressed an impossibility, was too great to contemplate. Mumia's trial and "conviction" classically revealed all of the elements of a rigged racist and classist judicial system. Philadelphia officials chose to avoid any further risk to its credibility.

One fact is certain. After 30 years of insisting that justice has been done - that Mumia's rights were fully protected - the State of Pennsylvania has been proven, through state institutions of its own choosing, to have violated the U.S. Constitution. Mumia has been unconstitutionally held in a tiny death row cell, in virtual isolation from all family and friends - all physical contact barred - for thirty years

This constitutional violation was scored by Mumia's legal team almost three decades ago when Mumia's first appeal included the simple assertion that the presiding Judge Albert Sabo violated the law by falsely instructing the jury regarding their deliberation. This is the same "hanging judge" Sabo who stated before two witnesses in his private antechambers that he was "going to help 'em fry the n****r."

Sabo falsely told the jury that in order to not execute Mumia and instead arrive at a sentence of life in prison without possibility of parole, they had to be unanimous with regard to considering any and all mitigating circumstances. Contrary to Judge Sabo the law states clearly in the Supreme Court's 1988 Mills v. Maryland case, that a single juror is sufficient to place any mitigating circumstance sufficient to negate a death penalty decision, before the jury for its consideration.
Sunday, December 11 at 2:00 pm is set for a mass meeting to open a new phase in the struggle for Mumia's freedom. Join us at the Laney College Forum, Oakland, CA at 2 pm. (one block from the Lake Merritt BART station). Speakers include: Angela Davis, Ramona Africa, Barbara Becnel, Jeff Mackler, Boots Riley, Crystal Bybee, Bishop Desmond Tutu (via video) and Michelle Alexander (via video). Admission free for Peralta students. All others $10 sliding scale. See attached flyer.

In Philadelphia, a parallel meeting featuring Cornel West is set for Friday, Dec. 9, 7:30 PM at the National Constitution Center.