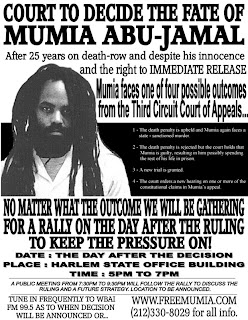 NEW YORK ACTIONS
THE DAY AFTER A DECISION IS REACHED gather at the:
Adam Clayton Powell, Jr. State Office Building
125th Street
5 to 8 PM, if it is on a weekday, and from 1 to 4 PM if it is a Saturday.

PHILADELPHIA ACTIONS
THE DAY AFTER A DECISION IS REACHED there will be a march:
13th and Locust to the Federal Building
(for more information: ICFFMAJ@aol.com)

The Partisan Defense Committee has called for a "day after"demonstration at the Federal Building in Lower Manhattan at 5 PM if the decision is reached on a weekday and from 1 to 4 PM if on a Saturday. In San Francisco, the Mobilization to Free Mumia Abu-Jamal has called for a demonstration on the "day after" at 5 PM at the Federal Court House, 7th and Mission Street (NOT the Federal Building.) For a flyer for other west coast actions, please CLICK HERE.

We join the celebration of the people's victory in Texas supported by an international movement to save Kenneth Foster/Haramia KiNassor's life. May the movement continue until it frees Haramia altogether and abolishes the death penalty and the prison industrial complex. And congratulations to the tens of thousands of especially young Black people, who poured into the streets of Jena and around the country to stand up against injustice and racism, and the criminalization, brutalization, and railroading of young men of color into prison.

On the heels of these important challenges to the racist death machine in Texas, and to the intense racism and injustice we see across this country, perpetrated and supported by all aspects of the government, we await the Third Circuit Court of Appeals decision on Mumia. As the decision could come down any day, we are making a tentative plan for the "DAY AFTER" should the decision be a negative one. In other words, if Mumia's death sentence is either affirmed or life in prison is imposed, we immediately take to the streets. Mumia should be released, based on his innocence and his so-called "trial". But we demand, at the very least, that he be granted a new and fair trial.

In an inter-city consultation, we have decided on three steps in our response:

1. An immediate press conference in Philadelphia upon announcement of the decision (that day, if possible, or at the latest the following morning),

2. LOCAL ACTIONS AROUND THE COUNTRY THE "DAY AFTER" and,

3. NATIONAL DEMONSTRATION on the third Saturday after the decision, in Philadelphia.

Some of the planned local activities for the "day after" are: in Philadelphia there will be a march from 13th and Locust, the scene of the original confrontation on December 9, 1981, to the Federal Building. It will be the following evening if that turns out to be a week day, or the following Saturday at noon. In New York City, the Free Mumia Abu-Jamal Coalition and the Harlem Campaign to Name a Street in Honor of Mumia Abu-Jamal are calling for people to gather at the Adam Clayton Powell, Jr. State Office Building on 125th Street from 5 to 8 PM, if it is on a weekday, and from 1 to 4 PM if it is a Saturday. We will let the community know what happened, mobilize for greater support for the street naming campaign, and organize people to join us in Philadelphia for the national demonstration scheduled for three weeks later. The Partisan Defense Committee has called for a "day after"demonstration at the Federal Building in Lower Manhattan at 5 PM if on a weekday and from 1 to 4 PM if on a Saturday. In San Francisco, the Mobilization to Free Mumia Abu-Jamal has called for a demonstration on the "day after" at 5 PM at the Federal Court House, 7th and Mission Street (NOT the Federal Building.). Call your local committee to find out what is being planned, or organize an activity. But everyone's voice of protest should be heard in some way if the decision is a bad one. We must free our Brother now!

As soon as we know what other local committees are planning for the "day after", we will send that information out. Please call the Free Mumia Abu-Jamal Coalition Hotline in NYC (212) 330-8029 to leave a message as to your plan for a local response with both your phone number and your e-mail address. You can also call Pam Africa at (215) 476-8812 or Suzanne Ross (917) 584-2135 if you want to speak with someone in person.

Free Mumia and All Political Prisoners! Abolish the Death Penalty and the Prison Industrial Complex! Stop Police and Government Terrorism!

Ramona of the MOVE organization needs your help. The 2008 Guinness Book Of World Records lists MOVE under "Mass Suicides" based on the May 1985 bombing and MURDER of MOVE people. They also list the MOVE organization with "cults" and lists the source of this misinformation as "The Cult Information Centre". MOVE is not and has never been a cult. MOVE is an organization and certainly did not commit "mass suicide". This is a malevolent and very dangerous lie. It's a deliberate tactic of this system to defame and misrepresent this organization so that when officials wrong us, treat us unjustly and even murder us, a lot of people will accept and dismiss it because of how we have been characterized by this system. We have discovered that both The Guinness Book Of World Records and The Cult Information Centre are based in London. There are several offices based in New York, and we are asking for your help by simply signing your name to demand the removal of the MOVE being labeled a cult and committing mass suicide.

We don't intend to let MOVE be defamed like this because it's wrong and dangerous.


http://www.ipetitions.com/petition/OnaMove
at 9:33 PM No comments: Links to this post