PROTEST IN PHILLY: Wednesday, December 9 at at 4pm

On Wednesday, December 9, 2009, join International Concerned Family and Friends of Mumia Abu-Jamal and the Free Mumia Coalition NYC, as we gather to protest the 28-year conspiracy to execute Mumia Abu-Jamal for a crime that an enormous amount of evidence proves he did not commit.

THE PROTEST BEGINS AT 4 PM
IN FRONT OF THE GOVERNOR'S REGIONAL OFFICE,
200 SOUTH BROAD STREET, NEAR MARKET STREET,
IN PHILADELPHIA.

There will be an indoor meeting following the protest
at 7PM at
the American Friends Center,
1515 Cherry Street.


They came in droves.

Despite the chilly November wind and the callous indifference of a steady rain, and inspite of incredible distances many had come, they came in droves. In a rainbowed wave of humanity, they came to protest the persisting persecution of an incredible human being facing an incredibly inhumane ordeal in the land of the free and the home of the brave.

They came to Washington, DC, the seat of American governmental power and authority, to demand justice for Mumia Abu-Jamal, the irrepressible ‘Voice of the Voiceless,’ now in his 27th year on death row in Pennsylvania, now with all of his appeals virtually exhausted.

Since then, all of those options were pursued with a vengeance, armed with new exculpatory evidence, armed with clear evidence of the blatant racial and political animosity and bias making a fair trial absolutely impossible, and yet still, at every turn, even the U.S. federal court of appeals pathetically overruled their own precedents and turned their backs on Mumia’s bid for freedom and justice.

Most recently, the nation’s top court said that all the new evidence was either too late or too insignificant to make a difference in a trial. They have in fact said that they would even entertain renewed calls for the reinstatement of Mumia’s death sentence.

Just weeks ago, Mumia’s attorney Robert Bryan put it this way to a Dutch audience. “Mumia is now a global symbol against the death penalty. This is the most dangerous time for Mumia since his 1981 arrest.”

To drive that home, demonstrators delivered at least 25,000 letters and petitions calling for a civil rights investigation in this incredible case.

While many were from all parts of the United States, a considerable number were from abroad, from places like Japan, Spain, Mexico, Greece, France, Germany and South Africa.

In a press conference before the demonstration and delivery of the letters, Fignole St.Cyr, a trade union leader from Haiti who came to personally deliver nearly a thousand letters, said that “the world should observe American justice because the U.S. is supposed to stand for democracy. Justice should not be twofaced. Justice for Black people and for white people should be equal.”

On the positive side, this enormous demonstration comes on the heels of the NAACP, the nation’s oldest civil rights organization now in its centennial year, passing a resolution at their national convention stating their new interest and commitment.

They were best represented by Marvin ‘Doc’ Cheatam of the Baltimore Chapter of the NAACP, the biggest chapter to not only come out for Mumia, put to also come out for other political prisoners. Under Cheatam, the Baltimore chapter has been steadfast in its call for justice for Marshall Eddie Conway, the Baltimore panther now imprisoned on account of a COINTELPRO driven prosecution since 1969.

Internationally, the demonstration also comes on the heels of the City Council of Munich, Germany, one of Europe’s largest, coming out for Mumia.

Serious legal observers believe that the Supreme Court may even use the case of a neo-nazi, Frank Spisak, who is on death row in Ohio with a similar fact pattern, to reinstate his death sentence by ruling against Spivak, and then reinstating  Mumia’s death  sentence, without even hearing the case directly.

The tireless Pam Africa bottomlined the status of the case in this way.

“Mumia is innocent.They are about to commit out and out murder,” she said emphatically.

Zayid Muhammad, a national official of the New Black Panther Party, joined the New York delegation and personally delivered his organization’s letter and pleaded with Attorney General Holder to not let “political convention” get in the way of delivering justice to Mumia.

“The affirmation of slavery and the property holding rights of slavemasters was once the political convention of the day,” his letter read.

“Jim Crow segregation and the practice of lynch mob terror to enforce that order was also once the political convention of the day. However, on this date, at this incredible hour, in this enormous historical moment, with the eyes of the world upon us all, we, not just as in we, the international human rights community, but we, as in ‘we the people,’ simply can not allow this to happen!”

The most poignant point in the demonstration came at the end, at the actual point of the delivery of the letters and the petitions. The Justice Department sent out a phalanx of African-American officers at the Department’s entrance to prevent the demonstrators entry with the petitions and sent out a Latino representative, Alejandro Mijar, to actually receive them. As they were being delivered, Orie Ross, of Brooklyn, asked them if they were familiar with the case. When they admitted that they were not, Ross, in a straightforward matter of fact manner very reminiscent of Rev. CT Vivian’s confrontation with Bull Connor many years ago on the right to vote, laid out the background to Mumia’s ordeal, especially when detailing the new evidence and the extreme racial bias of the late presiding trial judge Albert Sabo’s “I’m gonna help them fry the nigger,” compelling Mijar to blush with embarrassment. 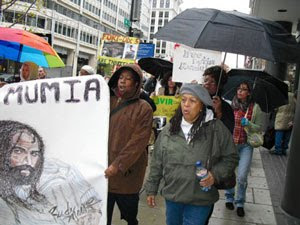 WASHINGTON (FinalCall.com) - Hundreds of supporters of Mumia Abu-Jamal—the political prisoner who has been held on Pennsylvania's death-row for 28 years, accused of murdering a Philadelphia police officer—marched to the U.S. Department of Justice to deliver thousands of petitions to Attorney General Eric Holder demanding a civil rights investigation of his case. Speakers at a rally prior to the Nov. 12 march represented Amnesty International's Death Penalty Abolition Campaign; the NAACP; and the Coalition to Free Mumia Abu Jamal.

Since the trial and conviction of the former journalist, Black Panther Party member, and supporter of Philadelphia's naturalist MOVE organization, Mr. Abu Jamal and his supporters have steadfastly maintained his innocence. Despite several legal setbacks, more and more evidence is discovered and made public supporting that claim.

Dr. Suzanne Ross of the Free Mumia Abu Jamal Coalition chaired the press conference and rally. She said that for 13 years Mr. Abu Jamal's prosecutors withheld evidence that a driver's license belonging to a passenger in the car driven by his brother, William Cook, was found in the pocket of slain police officer Daniel Faulkner the night of the 1981 shooting.

The petition and letter-writing campaign by Mr. Abu Jamal's supporters took on worldwide momentum earlier this year after Attorney General Holder called for the dismissal of charges against Sen. Ted Stevens of Alaska on the basis that prosecutors in that case withheld evidence favorable to the defense.

The letters to Mr. Holder on Mr. Abu Jamal's behalf point out that in addition to a similar pattern of evidence being withheld in his case, courts on local, state and federal levels have all violated their own rules to keep him on death row.

Despite a December 2001 ruling by Federal District Court Judge William Yohn that converted the death sentence in Mr. Abu Jamal's case to life in prison, he remains on death row and his life in jeopardy because of efforts by the Philadelphia district attorney's office to appeal Judge Yohn's decision. Mr. Abu Jamal has exhausted his federal appeals seeking a new trial.

"At this critical moment in Mumia's case, a civil rights investigation could mean the difference between life and death for Mumia," said Dr. Ross."It could also open the door for his release."

Heightened demands for a civil rights investigation came in April, after the U.S. Supreme Court accepted another court's motion that blocked the doors for a new trial for Mr. Abu Jamal, but at the same time, the court is still considering the Philadelphia District Attorney Office's appeal to reinstate his death sentence.

"I was at the NAACP convention this summer," Marvin "Doc" Cheatham, president the group's Baltimore Chapter told The Final Call. "I was on the resolution committee and I looked at all the resolutions, and created an amendment. What it basically said was that Mumia Abu Jamal, Reggie Clemons, Troy Davis, and Marshall Eddie Conway, all of their cases would be requested by the NAACP to be reviewed by the Attorney General Holder.

"It's imperative that Attorney General Holder look at this as civil rights violations," Mr. Cheatham continued, "look at each one of the cases, especially Mumia's case, and actually do a thorough review of the case, and allow those parties that have been organized for all four of the names that we put in the resolution to allow different groups to provide information that may not in fact have been introduced in the court trials.

International organizations and legal bodies such as Amnesty International, the International Association of Democratic Lawyers, the European Parliament, and city councils and national governments around the world have maintained that Mr. Abu Jamal was wrongfully convicted in a widely denounced trial and appeals process. Among the claims of wrongdoing are suppressed evidence, witness perjury, witness intimidation and an openly biased judge.

Attorney Thomas Ruffin told the rally of photos taken by freelance news photographer Pedro Polakoff, who arrived at the scene of the Dec. 9, 1981, shooting before the police forensics team. His pictures contradict the testimony of key prosecution witnesses during the trial. The prosecution, which had access to the pictures, did not reveal their existence to the defense.

Mr. Ruffin said that there was no proof that Mr. Abu Jamal had a gun in his hand when he arrived on the scene, or that he had fired it. The prosecution never presented paraffin tests for gunshot residue. The press conference and protest expressed open solidarity with victims of the state's Cointelpro-like campaign that has targeted more than 400 Muslims and recently resulted in FBI agents gunning down Imam Luqman Ameen Abdullah just outside of Detroit on Oct. 28.

"We were here to show our support for the most recognizable political prisoner in the world—Mumia Abu Jamal," Mauri Salakhan, founder and director of the Peace and Justice Foundation told The Final Call. "And we wanted to create a marriage, between this individual who is the most recognizable political figure as a prisoner, and a community (Muslims) that has become the most impacted community in the world in terms of political imprisonment, both here and abroad.

"It gave us an opportunity to show our support for Mumia, and also to take this opportunity to help those veterans that have been a part of Mumia's movement to become more knowledgeable, more aware of how political imprisonment has been impacting the Muslim community, and the importance of us working together around this issue. More and more, increasingly we're coming to find that this is something that has to concern us all, because it is affecting us all."

Mr. Salakhan organized the attendance at the rally of several family members and supporters of the "Fort Dix Five" from N.J.; two family members of another Muslim prisoner, Shifa, who came from Atlanta; and organizers with Project Salaam, an organization that works to draw attention to these and other cases from Albany, N.Y.

(To see first page of the entire article, visit: http://www.amsterdamnews.com/shared-content/e-edition/display.php?pubdate=2009-11-19&page=1&pub=)