From death row in Pennsylvania, the launch of a new book in the UK 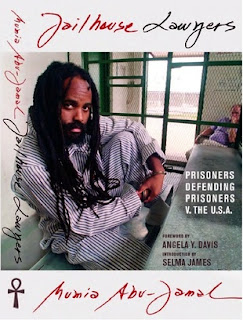 New Play on Mumia in Philly

The Free Mumia Coalition is joining Pam and will be driving down to Philadelphia together.  If you want to travel with us, please call our hotline -- 212.330.8029 -- by Wednesday, June 12, and leave your home number.  Please state it clearly and say it twice.  Also, contact Pam to let her know you want her to save you a ticket (for which you'll pay her on the 12th).

Ona Move!  Concerning the play "In a Daughter's Eyes" -- the first preview was on Friday May 27th.  When I heard about it I went to the first preview nite.  From what I read I wanted to be sure that this was not a sneaky hit pieces on our brother Mumia Abu Jamal and the Panther organization.  I will not tell you anything about the play other than that I stood and gave it a standing ovation.  I met the playwrite, a young 24 year old Black man and all who were involved with the play -- the two young women in the play, one who played the daughter of Mumia Abu Jamal and the other who played the part of copy Daniel Faulkner's daughter.  This is, as described, a truly intense drama inspired by the true story of Mumia Abu Jamal.  Oh, yes -- I was seated by a journalist from the Philadelphia Tribune who, after the play, did a short interview with me, asking me what I thought of the play.  I said I was the first to stand and give a long standing ovation.  I had come to see whether I will tell family and friends to demonstrate or tell them to come see this play for themselves.

Since that viewing, on Sunday May 29th I accomanied Mumia's daughter Goldi and a friend.  At the end of the play we decided, after taking pictures with the director, producer and playwrite, the two outstanding actresses Lynette R. Freeman and Krista Apple, whose dramatization of this play ket us intense as it took you on an emotional roller coaster ride.  The third time I saw the play I accompanied Mumia's wife, Wadiya Jamal, one of Mumia's former attorneys and  truly good friend of the family, Rachael Wolkinstein, and one of Mumia's former investigators.  Rachael had her granddaughter with her.  Also present was two trusted members of the original Black Panthers (this is important because we are serious about our movements and organizations).  The 2 Panthers were Barbara Easley Cox, wife of D.C. Cox, and our sister Gladys from Chicago, now in Philadelphia -- two serious sistas, dat's right, and Professor Robert Zeller and a friend, both long time fighters for justice.  And a very good friend, a serious activist for human rights and justice, Sister Omi Rahim.  At the end of the play we all stood for a well-deserved standing ovation and to do one on one with everyone involved in the play, and I also want to thank the Inter Act Theater Comapny who treated us all with the utmost respect and saw to it that all who came for the play were treated with respect...

Now I will be going back on Thursday June 9th with other activists coming from out of town, with Professor Sandra Jones, human rights activist and anti-death penalty advocate, to attend an academic conference.  If you want to join us, please email me before you get your tickets so we can get the cheaper tickets available with the group rate.  We also will be having a Family and Friends day on June 12 at 2 pm.

So contact me soon.  When we went on Wednesday June 1st it was sold out!!!!  So if you plan on going, get with me ASAP. You will not be disappointed.  On the 12th, following the play, there will be time for discussion.

Thank you for your continued support.

Pam Africa
(icffmaj@aol.com)
Minister of Confrontation for the MOVE Organization and
Chairwoman of the Uncompromising
International Concerned Family and Friend of Mumia Abu Jamal


This play is 1 hour and a half long, so we should be finished by 3:30 or 4 pm.  Then join us at the African celebration odunde, a few blocks away, at the Main Stage at 23rd and South, and several blocks of vendors starting at 16th and South to 23rd and 23rd to 25th and Grays Ferry.  Odunde is another event you do not want to miss, so join us for a full day of conscious upliftment and edutainment!

Rise up, everybody and get ready to work!!!!!