REMINDER: Less than 2 weeks left to get letters signed for Mumia!

We have less than 2 weeks left to get letters signed for Mumia!

We will be delivering letters to Eric Holder at the Department of Justice on Thursday, November 12. In order for us to have them properly prepared for our early, early morning departure from NYC on that day, we must have them at our PO box by Tuesday, November the 10th.

Use the sample letter below and send them to arrive at the Free Mumia Abu Jamal Coalition post office box by Tuesday, November 10.

Mail letters to the Free Mumia Abu Jamal Coalition at:

You can also deliver them to us at St. Mary's Church this coming Friday night, November 6, from 6 PM to 9 pm.  St. Mary's Church is at 521 West 126th Street between Broadway and Amsterdam Avenue (opposite a police station).

US Department of Justice
Washington, DC

To Eric Holder, US Attorney General:

We write to you with a sense of grave concern and outrage about the US Supreme Court's denial of a hearing to Mumia Abu-Jamal on the issue of racial bias in jury selection, that is, the "Batson issue". Inasmuch as there is no other court to which Abu-Jamal can appeal for justice, we turn to you for remedy of a 27- year history of gross violations of US constitutional law and international standards of justice as documented by Amnesty International and many other legal groups around the world.

We call on you and the Justice Department to immediately commence a civil rights investigation to examine the many examples of egregious and racist prosecutorial and judicial misconduct dating back to the original trial in 1982 and continuing through to the current inaction of the US Supreme Court. The statute of limitations should not be a factor in this case as there is very strong evidence of an ongoing conspiracy to deny Abu-Jamal his constitutional rights.

We are aware of the many differences that exist between the case of former Senator Ted Stevens and Mumia Abu-Jamal. Still, we note with great interest the actions you have taken with regard to Senator Stevens' conviction to assure that he not be denied his constitutional rights. You were specifically outraged by the fact that the prosecution withheld information critical to the defense's argument for acquittal, a violation clearly committed by the prosecution in Abu-Jamal's case. Mumia Abu-Jamal, though not a US senator of great wealth and power, is a Black man revered around the world for his courage, clarity, and commitment and deserves no less than Senator Stevens.

NAME
ADDRESS
E-MAIL
at 5:08 PM No comments: Links to this post

"MOVE"
2004 Documentary
This film exposes the history of violence perpetrated by the city of Philadelphia against the revolutionary organization MOVE, as well as the struggle that continues today to free eight MOVE
members who have spent 30 years in prison for a crime that they did not commit. The film is narrated by world-famous historian Howard Zinn and made its debut at numerous film festivals throughout the United States in 2004.


"IN PRISON MY WHOLE LIFE"
2008 Documentary
A look at the life of imprisoned political activist and former Black Panther member, Mumia Abu-Jamal, whose death sentence for killing a police officer was overturned in 2001 due to errors made during his original 1982 sentencing hearing. Mumia still faces capital punishment because Lynn Abraham, the presiding DA is appealing the case to the highest court in the land. It is likely the death sentence will be overturned. 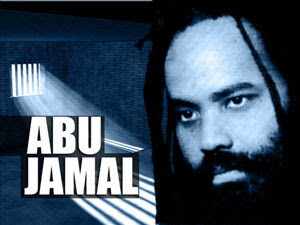 NEW YORK (FinalCall.com) - Activists in New York City engaged in the free Mumia Abu Jamal movement gathered for a meeting in Harlem on Oct. 23, to discuss the mobilization for the Philadelphia journalist on death row, convicted in 1982 of killing a police officer. Mr. Abu Jamal has always stated that he was innocent.

“Resistance is growing—preparations are in progress,” Dr. Suzanne Ross, a clinical psychologist and co-chairperson of the Free Mumia/NY Coalition explained to The Final Call. Ms. Ross said she attended the emergency meeting at the Abiding Truth Ministries church in Philadelphia on Oct. 17, where plans were laid out for the upcoming campaign to get Mr. Abu Jamal freed.

“The Philadelphia meeting was full of a high-level of consciousness and energy—all focused on saving Mumia Abu Jamal,” Dr. Ross said.

Rallies were held Oct. 24 in Philadelphia in front of the Fraternal Order of Police headquarters, a group that has been quite vocal concerning putting Abu Jamal to death; another rally is set for Washington, D.C., on Nov. 12 in front of the Dept. of Justice. Letters and petitions calling on U.S. Attorney Eric Holder to open up a civil rights investigation concerning Mr. Abu Jamal's case will be delivered to the federal agency.

Attorney Roger Wareham of the Brooklyn-based December 12th Movement explained to The Final Call why he wrote the attorney general. “At this point it is a question of trying to find any avenue to save Mumia's life and to win vindication for him, so that he may go free,” Mr. Wareham said.

“We have turned to the attorney general because we do not have faith that the decision from the U.S. Supreme Court will be favorable; even though there is enough undeniable proof that Mumia's rights were violated during his trial,” Mr. Wareham said. The high court is reviewing a case that may decide Mr. Abu Jamal's case because some of the elements to be considered are similar.

Supporters have also started an online petition at FreeMumia.com that asks the attorney general to open a civil rights probe.

In July, the NAACP passed an emergency resolution during its 100th anniversary convention in NYC, asking Mr. Holder to conduct a civil rights investigation. “We had a meeting with the attorney general, and the subject of Mumia Abu Jamal did surface. The attorney general said he was aware of the case and would look into it and get back to us,” Hilary Shelton, director of the NAACP's Washington office and senior vice president for advocacy and policy told The Final Call.

Supporters for slain officer Daniel Faulkner hope the attorney general “won't intercede.” State and federal courts, including the U.S. Supreme Court, have said they haven't found any wrongdoing in the handling of the Abu Jamal case in 1982, they argue.

Mr. Abu Jamal's attorney Robert Bryan, appearing in The Netherlands for the Oct. 10 World Day Against the Death Penalty commemoration sponsored by Amnesty International, told the gathering “Mumia is now a global symbol in the campaign against the death penalty. This is the most dangerous time for Mumia since his 1981 arrest.”

Mr. Bryan, a San Francisco-based death penalty attorney also explained that the U.S. Supreme Court would hear a case, with similarities to his client's case on Oct.13. He said that Smith v. Spisak may well determine if the court would re-instate Abu-Jamal's death sentence. The attorney's statements were e-mailed to journalists and supporters.

According to www.oyez.org/cases, a Web site that tracks U.S. Supreme Court cases, neo Nazi Frank Spisak was convicted of murder and sentenced to death in Ohio. The Sixth Circuit Court of Appeals upheld his contention that he received ineffective counsel and that at sentencing the jury instructions were unconstitutional, ignoring Ohio Supreme Court standards for prejudice.

According to the Sheridan Texas Project in Austin, which advocates for a moratorium on executions, the Supreme Court may decide to side step Mr. Abu Jamal's prosecutor's petition while hearing Smith v. Spisak; and if those prosecutors are successful in having Spisak's death sentence restored—the justices won't bother to hear the Philadelphia activist's case.

The justices may only issue a one-page order for the Third Circuit Court to reconsider whether Mr. Abu Jamal should have his death sentence re-instated, the group said.

“We have had 28 years of struggling to free Mumia, and now our numbers are growing—not diminishing,” stated Pam Africa, co-chair of the International Committee of Friends and Family of Mumia Abu Jamal, in Philadelphia. “Our goal now is to get people organized and educated about the case, and how the people can save Mumia's life.

“Our faith is in the people, and their ability to put pressure on the people in power,” Ms. Africa said.

Mr. Bryan, during his Netherlands address, noted the importance of the movement in Germany to save Mr. Abu Jamal and the impact it would have on other nations. Organizers of the International Campaign to Save Mumia Abu Jamal reported that if the Supreme Court or the Third Circuit Court rules to re-instate his death sentence, three days after such ruling there will be demonstrations in Germany, Mexico and Greece in front of the U.S. embassies.
at 4:48 PM No comments: Links to this post