From the Prison Radio Blog

Our visit with Mumia Abu-Jamal

Larry Holmes and I have been visiting political prisoner Mumia Abu-Jamal for 16 years. We started visiting him when he was on death row at State Correctional Institution-Greene in Waynesburg, Pa., which is near the West Virginia border. Our trips there by car from New York City would take at least seven hours, and even longer by bus.

Our first visit with Mumia — in March 1996 — was also the last face-to-face independent video interview of him, thanks to the late Key Martin, a founding member of the Peoples Video Network, who persisted in forcing the prison to grant this three-hour interview.

All of our visits at SCI-Greene gave us a glimpse into Mumia’s almost 30 years on death row — that is, the inhumane conditions that he and others were forced to endure, including spending 23 and a half hours a day in a tiny, poorly lit cell; being deprived of exercise, which caused the swelling of legs and ankles; and inadequate food and medical care.

Before every visit, Mumia was subjected to an invasive strip search. His wrists and ankles were shackled during visits. But when we met with him and discussed world events from a revolutionary perspective, these very oppressive conditions would seemingly melt away. Mumia had the ability to make each visit an illuminating political experience despite the repressive environment.

This past December, following the overturn of Mumia’s death sentence, he was moved to SCI-Mahanoy, a general population prison in Frackville, not far from Harrisburg, Pa. Larry and I had the incredible opportunity to visit ­Mumia on May 6. We were ecstatic to be able to physically hug and shake hands with him for the first time in 16 years. He was in very good spirits, smiling and very animated.

The visiting room had the atmosphere of a large cafeteria, including a commissary to allow family members and friends to purchase food for their loved ones in prison. It was very heartening to see and hear children running and laughing throughout the room, and to see open affection being shown towards prisoners, all of whom were wearing jumpsuits with “DOC” — which stands for Department of Corrections — written on the back. When we asked Mumia what it was like to be off death row after 30 years, he replied, “It is still a major adjustment.”

He told us how surprised he was that so many prisoners knew of his case, and the respect they had for him as a political prisoner. A Mumia activist told me how a relative of a white prisoner had reproduced Mumia’s first book, “Live from Death Row,” for him to read. Mumia’s books are banned outright by the prison.

Mumia also told us how he has become a mentor for a number of prisoners, especially young ones. One prisoner in particular is only 20 years and was sentenced to a 40-year prison sentence for attempted murder, not murder! According to Mumia, the prison population is 60 percent Black, with a large number being Muslim.

For most of the three and a half hours we visited with Mumia, the main discussion focused on the Occupy Wall Street movement. Mumia acknowledged that Occupy Philadelphia forces helped play a decisive role in getting him off of death row by joining forces with veteran pro-Mumia activists like Pam Africa.

Mumia told us that when a number of Black activists expressed to him some misgivings about OWS, his response was to encourage them to recognize OWS as an evolving movement — a dynamic, evolving movement that activists must find ways of engaging, ideologically and strategically.

Mumia spoke about the economic basis for OWS, in that the predominantly white youth-led movement has been cut loose by capitalism, especially in this particular stage of deepening global economic crisis. These white youth are finding out that they have more in common with Black and Brown youth, who have historically known that the only future that capitalism offers is racial profiling and mass incarceration.

These white youth are becoming disillusioned with capitalism because, while they have been told they would have a better life than their parents, in reality they cannot find any good-paying jobs despite their college degrees. They are also finding out, as they face increasing repression, that the police as an armed force are neither their friends nor workers.

Mumia stated: “I am profoundly encouraged by the Occupy movement. It’s good news for revolutionaries everywhere when those who once thought that they were privileged start to rebel against the system and join with those of us who have no illusions about or love for imperialism.”

After we said our goodbyes to Mumia, Larry commented to me: “It was an incredible experience to be able see and touch Mumia without his ankle-to-wrist shackles and enclosed in a small booth behind a plexiglass window, which was the only way he could see visitors on death row. We must not be content or rest until Mumia is free.”

Moorehead, a WW managing editor, and Larry Holmes, Workers World Party’s First Secretary, are both Secretariat members of WWP. To view excerpts from the 1996 PVN interview, go to 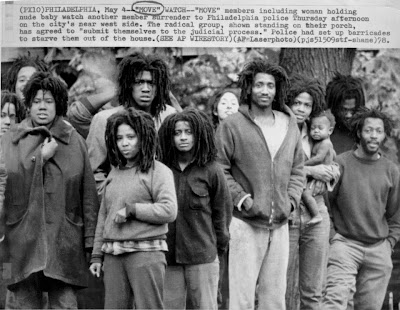 Following the shooting death of Philadelphia Police Officer James Ramp during the August 8, 1978 police siege on Move’s headquarters in West Philadelphia, MOVE members Janine, Debbie, Janet, Merle, Delbert, Mike, Phil, Eddie, and Chuck Africa were convicted of 3rd Degree Murder, Conspiracy, and multiple counts of attempted murder and aggravated assault. Each was given a sentence of 30-100 years. MOVE and others have contested both the evidence and the fairness of the MOVE 9 trial.

The MOVE organization is planning a week long of events to bring the community out to educate and organize around the MOVE 9 case.

Wednesday (5/9)
6:00pm, A-Space (4722 Baltimore Avenue)
Write-In to the Parole Board and Judicial Committee for the release of the MOVE 9.

For more information about these events, please contact onamovellja@aol.com and the MOVE9parole.blogspot.com

Listen to our Political Prisoners and POWs speaking at the Dept. of Justice on April 24th:


http://www.jerichony.org/A24PPStatements.html
at 8:53 PM No comments: